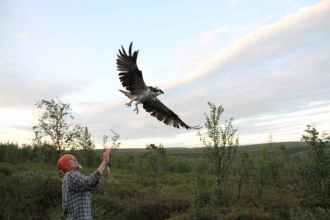 Since 2001, the Osprey Foundation has been tracking Ospreys from Lapland via satellite transmitters. Since, on the whole, our information on the migration and wintering ranges of Ospreys from Lapland is fairly sparse, the research has focused mainly on tracking these ‘northernomost in the world’ Ospreys in accordance with the general objectives of satellite tracking of Ospreys.

The transmitters for the Ospreys from Lapland have been funded by Vattenfall Oy (2002–2006), a group of private citizens (2013–2014), and the Finnish Cultural Foundation (2014-2016). In 2014, the male Osprey Ilpo, the female Helena, and their female fledgling Birgit from Renko were selected to represent Finland, along with a family from Utsjoki, in the international school project World Osprey Week (WOW).

Ospreys being tracked at the moment

Olli-Pekka Karlin and Matti Suopajärvi set up an Ecotone solar-satellite transmitter to a breeding Osprey male in northern Tornio in the beginning of July 2020. Matti Suopajärvi had ringed the male in Tervola as a nestling in 2010 about 40 km from his current nest. Thanks to Tuuliwatti Oy and   FCG, Finnish Consulting Group who make this possible.

Female Osprey Seija from Utsjoki, who is part of the international school project, was named after the wife of Tero Niskanen, a long-time participant in the Osprey project. The Osprey Foundation taskforce Harri Koskinen, Tero Niskanen, Joona Koskinen, and Atte Laaka fitted Seija the Osprey with a solar-powered 30-g Microwave GSM/GPS transmitter on 26 July 2014. Seija had not been ringed and her background was unknown. When she was ringed, Seija weighed 1,630 g and she was given a metal ring M-49000 and a yellow plastic ring Z0.

The male Osprey Tero from Utsjoki, who was part of the international school project, was named after Tero Niskanen, one of the participants in the Osprey project. The Osprey Foundation taskforce Harri Koskinen, Tero Niskanen, Joona Koskinen, and Atte Laaka fitted Tero with a solar-powered 30-g Microwave GSM/GPS transmitter on 26 July 2014. Tero had not been ringed and his background was unknown. Tero weighed 1,480 g and was given the official name M-66544 and a red plastic ring with X0 on it to improve field readability.

The Osprey Foundation taskforce Harri Koskinen, Tero Niskanen, Ilmari Häkkinen, and Seppo Vepsä fitted Agle the Osprey from Utsjoki, part of the international school project, with a solar-powered 30-g Microwave GSM/GPS transmitter on 29 August 2014, when she was already ready for flight. When the transmitter was fastened, Agle weighed 1,710 g and her rings were M-66540 and yellow AM. The brood included another fledgling.

In summer 2013, the opportunity to continue the satellite tracking of Ospreys from Lapland presented itself when a group of private citizens announced, through its spokesperson Professor Heikki Kainulainen, that it would donate the funds for buying one satellite transmitter and receiving the data from it. The donors wished the transmitter to be fitted to an Osprey nesting in the Muonio area. After some setbacks, the taskforce Juhani Koivu, Harri Koskinen, Tero Niskanen, Harri Salo, and the Muonio Osprey project activist Professor Heikki Kainulainen managed to catch a male Osprey on the border between Muonio and Kittilä on 29 July 2013, and fitted it with a satellite transmitter. Since the male weighing 1,390 g had not been ringed, the aluminium ring M-48983 was fastened on his left talon and a red plastic ring for better field readabilty with the code X1 in white on his right talon. For everyday use, the male was named ‘Heikki.’ The female in the same nest was also caught and ringed with aluminium ring M-48984 and a yellow plastic ring Z5. There were two nestlings in the nest.

Data on the satellite tracking of Annikki, Harri, Lasse, Lea, and Marjaana will be published later.