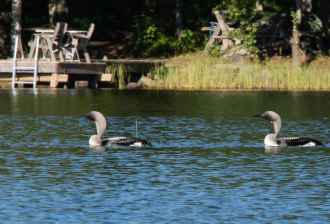 Migration routes and wintering areas of Black-throated Divers breeding in Finland are unknown. Only minor number of birds have been ringed in the breeding areas and there aren’t any ring recoveries of them. Satellite tracking is now used to get this vital information of the species. Project is implemented by the Black-throated Diver working group of BirdLife Finland in cooperation with inter alia Julius Morkunas (Nature Research Centre, Institute of Ecology, Vilna, Lithuania) and Finnish Museum of Natural History.

This project is the first one in Finland where satellite telemetry has been used for diving birds by an implant transmitter. Similar implants have been used only for 2,000 birds in the world before.

Currently (spring 2018), there are no individuals tracked by satellite transmitters. 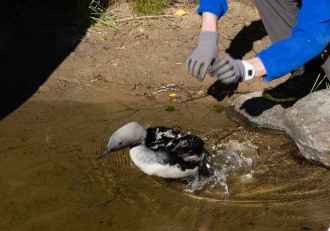 Adult bird called “Lahja” bred in Kangasniemi and got a transmitter on 22 August 2015. The transmitter has not sent new data since February 2016. 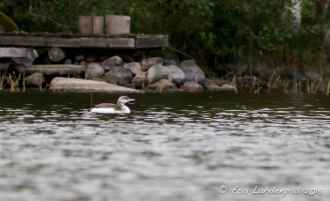 First year bird “Rurik” was born in Mikkeli and got transmitter on 23 August 2015. Rurik was found dead on 30 December 2015 nearby Odessa.

This section is updated weekly during the migration period or in case something interesting or exceptional has been observed at other times. The most recent information can be found on the before mentioned maps.

Lahja spent almost 1.5 months within a small area near Sinop Peninsula. It is possible that the bird has been moulting and thus had reduced flight ability. However, according to the latest locations, Lahja has moved about 75 km north-east and is now fishing in very deep waters.

Rurik has been found dead near Odessa just before New Year. The cause of death is not known.

Lahja has finally found a good wintering place. The bird has spent almost a month within a small area near Sinop peninsula, on the northern coast of Turkey. The daily movements have been just a few kilometers.

Rurik’s transmitter has stopped working. The last fixes were received just before Christmas. According to some incomplete messages that include sensor data, the bird has probably died. It is likely that some kind of accident has happened, because until the end, the bird was moving actively and appeared to be in good condition.

Lahja is spending the mid-winter off the coast of Turkey. The daily movements can be long: on December 21st , the bird moved about 200 km westwards! However, during the last two weeks Lahja has stayed within a relatively
small area near the city of Ayancik, only about 5 km offshore.

Both black-throated divers are still at Black Sea but they are behaving quite differently. Lahja is constantly on the move: during the last two weeks it has moved more than 500 km east along the coast of Turkey. In contrast, Rurik has stayed within a relatively small area in the shallow waters off Danube Delta, the daily movements being about 10 km.

Rurik has finally arrived at Black Sea! After being located near the coastline on Monday 30 November, the bird has moved about 50km offshore but is still fishing in shallow waters.

Lahja has moved further south and is now only 140km off the coast of Turkey.

After spending almost three weeks at Kiev reservoir, Rurik first moved about 100 km south to Kaniv reservoir. The following afternoon (Thursday Nov 11), the bird was located further 350 km south-west on the border of Ukraine and Moldova, at a small reservoir along Southern Buh River. There is only 70 km to go to the Black Sea!

Lahja has moved about 50 km south and is now fishing at open sea of 1.5 km depth.

No major news this week. Rurik is still at Kiev Reservoir and Lahja at Black Sea. During the last 10 days, Lahja has moved about 100 km south-west and is slowly approaching the coast of Romania.

Having spent only a couple of days in Estonia, Rurik was on the move again. On the afternoon Fri 6 November, Rurik was located at Kiev reservoir in Ukraine. Some Black-throated Divers are known to overwinter at inland reservoirs and lakes so it’s interesting to see whether Rurik will continue its migration.

Lahja has spent the last few days at an upwelling area at the edge of deep sea. Such areas are likely to be extremely good for fishing.

Rurik has finally started its migration! After spending almost a month at Lake Kukkia, the bird first moved 20 km south to Lake Kuohijärvi. The following evening (Tuesday 3.11.) it had already reached the northern coast of Estonia. The latest locations are from coastal waters of Kunda, about 100 km east of Tallinn.

On Tuesday Oct 27th, Lahja had already arrived at Black Sea, south-west of Krim peninsula. 2,000 km migration from breeding grounds to likely wintering areas took less than three days. The latest locations are from 1,500 m deep open sea.
Despite cold weather, Rurik has not started its migration but has now spent more than three weeks at Kukkia lake. According to field observations, it has joined a group of three adult Black-throated divers.

Lahja has started its autumn migration! On Saturday evening 24th October the bird was located in Latvia, Riga Bay, more than 500 kilometers south of Jääsjärvi. On Monday morning 26th October Lahja was on the move again: this time heading southeast over Belarus and Ukraine.

Both satellite divers have spent the last two weeks at the same lakes in southern Finland (Lahja at Jääsjärvi and Rurik at Kukkia). Obviously they have found good fishing areas to prepare for autumn migration. Migration is likely to start as soon as weather gets colder.

Both Black-throated Divers have left their home lakes. Lahja was mainly in the Suontee lake (municipality of Joutsa) already in September and visited her breeding lake only now and then. Now she is in Jääsjärvi lake (Hartola). Rurik stayed in the lake he was born until October 4th, when he flew 65 kilometers northwest in the Rutajärvi lake (Joutsa). A couple of days later Rurik flew to southwest in the Lake Kukkia (Pälkäne). It seems that either one still does not have to hurry up to begin the migration.