Why birds are ringed?

Bird ringing is an important tool in studying migration. It provides information on the migration routes of different bird species, the stopover sites and wintering areas and migration speeds. In addition to migration studies, ringing is an invaluable research method in many other sub-areas of ornithology. It provides information on among other things the age, mortality, causes of death, and fidelity to birthplace, nest site and mate. It also gives information on the yearly changes in the number of birds, the number of fledglings produced during an individual's lifetime and the inheritance of different traits, the social rank in bird flocks, and the size and utilisation of the occupied territory. The information produced by ringing also promotes the protection of birds.

The material produced by ringing is used in solving many problems belonging to basic research. These mostly belong to the fields of population ecology, evolution research or ethology. In fact, ringing has been the prerequisite for the birth of many a PhD thesis. Applied research also needs ringing as a tool. For example, in North America quite a lot of government funds are used for the ringing of game birds, as this provides material, on the basis of which the impact of hunting on the game bird population can be estimated. Thus, one can also optimise the yearly "harvest".

A new use for the ringing event itself is environmental education. At least at some bird stations in the US, Sweden and Lithuania events aimed at the general public are organised. At these events an concentrated dose of information about the protection of nature and the environment is given. According to the gained experience the message of protecting nature comes across a lot easier, when the listeners are brought face to face with the individuals to be protected.

Scientific ringing of birds was started in 1899. Then, the Danish senior master Hans Christian Cornelius Mortensen conducted his successful ringing experiment by marking hundreds of Starlings with aluminium rings, and by getting afterwards recovery reports of them, even from abroad. Finland followed Mortensen's example in 1913, when Professor Johan Axel Palmén started the ringing of birds in our country. In 1926, the responsibility for bird ringing was moved over to the Zoological Museum of the University of Helsinki, where a Ringing centre was later established. Nowadays, the Ringing centre, which is situated at the Finnish Museum of Natural History, employs a regular staff consisting of a director, a coordination curator and three senior museum technicians.

In Finland, ringing is governed by laws of nature conservation and hunting. The license authorities are the Centres for the Economic Development, Transport and the Environment and the Finnish Wildlife Agency.

After the onset of bird ringing in 1913 the number of birds ringed increased slowly. In the 1930s the annual sums reached 10 000 individuals. 100 000 annual ringings was reached in 1939. During the war the ringing activities were naturally very low. During the last two decades 180 000–260 000 birds have been ringed annually. Of these ca. 40 % have been nestlings. 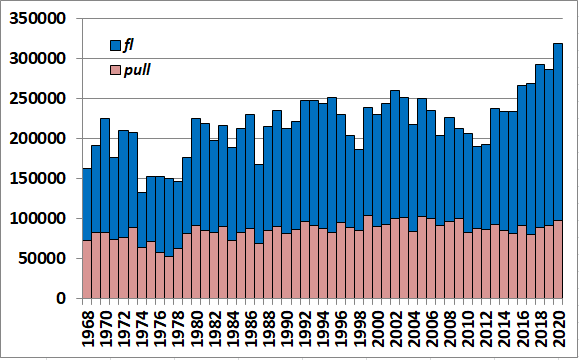 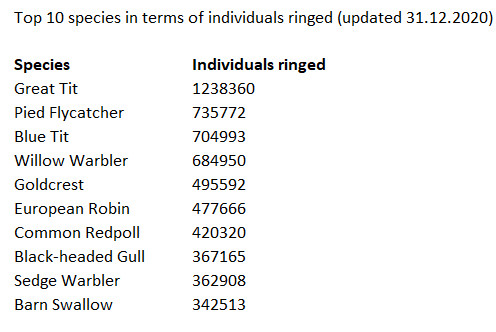 In 2010, the Finnish Ringing Centre processed a total of 25 222 recovery and resighting reports of Finnish Bird rings. The grand total of recoveries filed in the database for the years 1913-2010 was over 1.1 million at the end of 2010.

A large part of the recoveries consists of ordinary, "less interesting" retraps from the same place within a few days. Thus, when annual statistics are calculated only those recoveries that fulfil any of the following criteria are accepted:

Using the method mentioned above makes the number of "interesting" recoveries 12,289 in 2010, while the total accumulation for 1913-2004 is more than 510,000. These numbers best describe the amount of recoveries suitable for most analyses.

The majority of recoveries of birds ringed in Finland come from Finland. Some 20% of the recoveries defined as "interesting" are reported from abroad. However, only 11% of all recoveries included in the database are foreign. 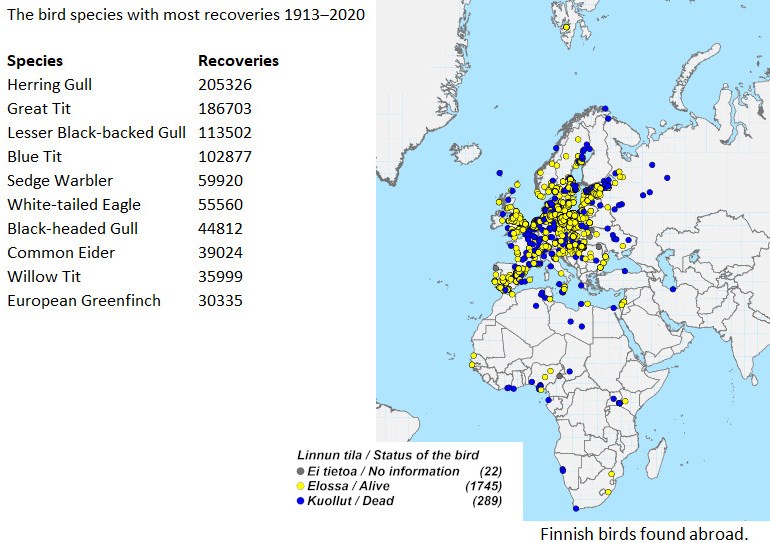 The Finnish Ringing Centre coordinates the bird ringing in Finland. The duties of the centre include the maintenance of the databases, selection and training of ringers and controlling of the quality of field work and data. The Ringing Centre organizes the delivery of rings for the ringers.

Anyone who finds a bird ringed in Finland - and also the ringer of the bird found and a ringer who forwards a recovery made by a non-ringer - receives a computer printed personal thank-you-letter, which includes the ringing and the finding details plus the previous possible recaptures and/or resightings of the bird. In addition, copies of letters concerning rings found abroad are sent for the appropriate country's ringing centre, even if the original recovery report has not come through that centre. The recovery letters are printed optionally in ten different languages, namely Danish, English, Finnish, Flemish, French, German, Italian, Norwegian, Spanish and Swedish. Every year ca. 17,000 recovery letters and 3,000 recapture letters are printed about Finnish rings

Dozens of requests for data from both domestic and foreign researchers and authorities are received every year. The Centre also conducts the necessary correspondence with both finders and ringers regarding the preliminary checking of the data.

In Finland, ringing has always been based on voluntary work. The Finnish Museum of Natural History is responsible only for the hiring and wages of the Ringing Centre's staff, as well as for paying for rings and office equipment. Thus, in addition to travel and such costs the ringer has to pay for literature, climbing gear, protective headgear, safety harnesses, scales, measuring equipment, bird nets and other trapping gear. Only organisations upholding bird observatories have been able to pay a modest daily fee to ringers who have worked for a long time at the observatories.

The number of yearly active ringers has increased from the roughly twenty in the early days to the good five hundred active today. During the first decades ringing was the privilege of Masters and students, but times have changed. Nowadays, the civilian professions of the ringers vary a great deal, as every bird-watcher, who has passed the exams, can become a ringer. The Finnish ringer of today is a competent expert on birds, skilled and dedicated to his work. The terms and conditions and the schedule of ringing exams are presented here.

The database of ringers at the Ringing Centre includes a total of ca. 2,700 names. At the end of 2013 there were 634 valid permits. Despite the amount of women bird-watchers in Finland constantly rising ringing has – oddly enough – remained a strongly masculine hobby in our country, with only 64 (or 10 %) active ringers who are women.

The representative organ of the ringers is the Ringers' Committee elected at the annual Ringers' Meeting. It also issues statements to the Ringing Centre on all applications for ringing permits. The regular members of the committee in 2014 are Heikki Kolunen (Chairman), Petri Suorsa (Secretary), Pekka Pouttu, Matti Suopajärvi, and Petri Suorsa with deputy members Ohto Oksanen and Jouni Lamminmäki.

The absolute must for ringing is to use the right ring size and type. In Finland, there are a total of 26 ring sizes of differing diameter in use, but the different ring types (used in Finland) amount to 36. Most rings are made from aluminium. Steel and even harder alloys are used only for such bird species (e.g. auks and gulls), on whose legs an aluminium ring would last only for a few years.

In addition to the return address all rings are engraved with an individual marking (the number of the ring). The marking includes no more than two letters - and these define the type of ring - the rest are running numbers. The numbers of the ring can be for instance like these: X123456, 123456J, PA12345, HT- 123.456, EJ1234

The return address has been printed in its Latin form on Finnish rings. Thus, instead of "zoological museum" the largest rings say MUSEUM ZOOLOG, HELSINKI, FINLAND or MUS.ZOOL, HELSINKI, FINLAND, whereas the smallest rings contain only the following: MUS.Z.HKI, FINLAND.

Of the rings, the smallest fits a Goldcrest, the largest a Mute Swan. The diameter of a ring for a Goldcrest is 1.8 mm, the weight only 0.03 g. The corresponding measurements for a ring for a Mute Swan are 26 mm and 12 g. The Goldcrest itself weighs on average 5.5 g and the Mute Swan up to 15 kg. Thus, the weight increase to the bird from the ring can be roughly compared to that of a wristwatch for a human. In addition to the metal ring, birds can, in special studies and by a separate permit, be fitted with extra identifiers such as coloured leg or neck rings.