My research focuses on the taxonomy and systematics of the tropical Diving beetles. Furthermore I study the taxonomy, systematics, distribution and ecology of the aquatic leaf-beetle genus Macroplea.  I am in charge of the keeping of the Finnish Coleoptera collection of the museum.

Taxonomy and systematics of the tropical and subtropical Diving beetles (Coleoptera, Dytiscidae)

During my almost 40 year career as scientist in the Zoological museum my main interest has been in the Diving beetles. Most effort has been laid on the tropical and subtropical regions on both side of the Equator. The first 20 years were spent on the taxonomy and systematics of Hydroporinae in Africa including Madagascar. Besides the focus on the African fauna I, at the same time worked with various genera occurring in Australia, in the Far East or the Oriental region and in the Americas. Finally, my studies resulted in a revision of the Hydroporinae in the Ethiopic region, which contains about 1000 species.

The organisms of the Tropics belong to one of the main targets of the biodiversity-study of today. The change of the original environments due to human activity is increasing, and the risk of partial extinction of fauna and flora is overwhelming. Worst scenario would be that numerous organisms disappear before they have been scientifically described and introduced, both for science and the public.

Shortly, my input in science is describing of the biodiversity of the water-beetle-fauna in the Tropics. My aim is to study all available material of my group of interest and to collect additional material for study from areas, which are badly known. My survey includes also a comprehensive study of the available literature. The final goal is to produce classifications on the basis of vast examination of specimens and by use of modern techniques. The taxonomic status of all taxa of a group under work is evaluated. A prerequisite for this is that the type exemplars are found and examined. Thus far, my studies have yielded in some 200 of new taxa, especially on species-level. Lately, my interest has focused on the subgenus Laccophilinae and the genus Laccophilus occurring in Africa in particular. All Diving beetles are predators, both as larvae and adults. Most species are capable of flying.

The knowledge of the composition of organisms can be used in the planning of the land-use and as motivation for species-protection. Possibly, some Dytiscidae species could be used as indicator-species in water-quality-evaluation. The taxonomic knowledge of the tropical, aquatic insect-faunas is still, however, quite limited, which strongly supports the continuation of taxonomic input in these regions. 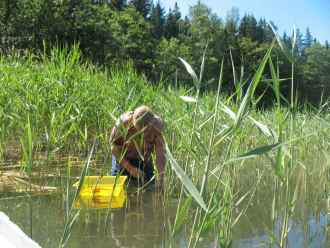 Parallel with my study of the Diving beetles I also study the taxonomy, systematics and ecology of the aquatic Leaf-beetle genus Macroplea. The number of Macroplea species occurring in Finland is three, which is “world-record”. One of the species, M. pubipennis, is in Europa only recorded in Finland. This has rented it a status as a directive species in the European Union and accordingly, Finland is responsible to assure its future occurrence within the borders of the union. These studies have resulted in about 10 scientific articles and reports.

These two projects have thus far produced about 100 publications, out of which the publications after 1994 are listed in the JULKI-register of Helsinki University.