Chronological methods reveal connection between population and the advance of farming

A recently published study indicates that unlike the rest of Europe, Finland was slow to adopt farming. This has been established through chronological methods and pollen analyses, as well as by comparing the results with previous estimates of the size of the human population.

The date of the beginning of farming is one of the must central and most disputed questions in archaeology. Agriculture influences not just the way food is produced, but also the way the human community organises itself and manages its land use. After the adoption of farming, it is possible to produce excess food.

However, farming is more risky than the hunter-fisher-gatherer lifestyle, as both the diet and the living environment become more restricted.

It has previously been found that the number of carbon-dated archaeological discoveries of objects which relate to human activity in Finland begins to increase from the beginning of the Bronze Age in the region, approximately 3,500 years ago.

The new study examined the beginning and wider adoption of farming based on pollen analyses. Pollen samples from lake sediments and swamp peat allow researchers to determine the times when the amount of grain pollen began to steadily increase. This indicates permanent agriculture in the area. Radio carbon, lake sediment and paleomagnetic dating of the material were carried out, and spikes in grain pollen were aggregated into a graph which depicts the progress of the adoption of farming.

The pollen samples showed individual indications of agriculture from just under four thousand years ago. The first tentative signs of permanent farming can be seen from the beginning of the Bronze Age approximately 3,500 years ago. A second, better documented wave of agriculture took place at the end of the Bronze Age, during the last millennium BCE. However, a more intense adoption of farming began during the Iron Age in the 2nd century, and continued until the 13th century.

Permanent farming was first established in south-western and central Finland. It then moved slowly, over millennia, towards the north-east and within the southern and central parts of the country, until around the midway point of the Iron Age in the 8th century when the advance of farming stopped, only to continue later until the 13th century. At that point, during the early Mediaeval period, the area of permanent farming stopped expanding, as more intense forms of agriculture were apparently adopted in inhabited areas.

“The beginning of farming wasn’t a single event. Instead, it must be seen as a long-term process, which probably entailed clearing new land,” says researcher Maria Lahtinen of the University of Helsinki’s Finnish Museum of Natural History LUOMUS .

The results from the pollen analyses were compared with previous estimates of the changes in Finland’s population. The research showed a strong correlation: when farming was adopted in an area, its population grew. In other words, farming provided more resources which then increased the population – even during the prehistoric era.

“We currently do not know who helped farming spread. Was the new survival strategy brought by migrants, or did the local population independently adopt farming as a form of subsistence,” muses Lahtinen.

Services of the LUOMUS Laboratory of Chronology 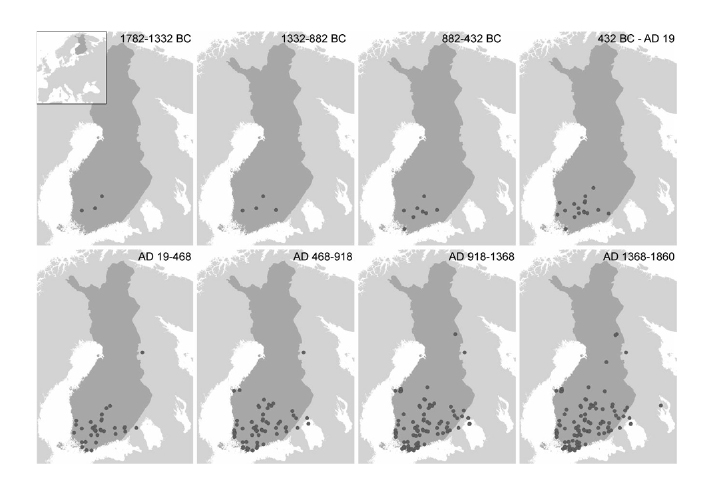